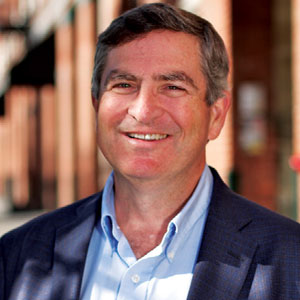 In the 1950s, U.S. cities embarked on an idealistic spree of urban renewal. It resembled the present moment, where innovators share exuberant plans to make smart cities. Back then though, the U.S. had a champion of urban life, a journalist and activist who questioned our intentions and defined what makes a city great. Her name was Jane Jacobs.

In a classic article for Fortune, Jacobs wrote, “There is no logic that can be superimposed on the city; people make it, and it is to them, not buildings, that we must fit our plans.” We can swap “technology” for “buildings” in the current dilemma.

Smart city planners are eager to introduce 5G networks, connected vehicles, and sensors everywhere. If we superimpose these technologies on cities as they are, we will get more of what we have. Basically, we will create more efficient traffic jams.

Before we screw up, I propose that we physically redesign cities for people, not automobiles. If we create tiers of transportation that enable people to flow through their cities, smart technology will fit our needs. It sounds idyllic, but how do we practically do this?

In 1995, Adrian Bejan, a professor of mechanical engineering at Duke University, listened to a Nobel Laureate lecture about the randomness of the tree-like shapes that abound in river basins, lightning, and circulatory systems. These systems weren’t random, Bejan realized. They followed the laws of physics. He came up with the “Constructal Law,” which states, “For a finite-size system to persist in time (to live), it must evolve in such a way that it provides easier access to the imposed currents that flow through it.”

Put simply, a system will evolve to facilitate the flow of whatever moves through it. A river system, for instance, evolves to move water more efficiently. Likewise, a transportation system evolves to help people flow through their habitat. The Constructal Law might explain why we developed streets, lanes, and avenues that, like river tributaries, flow into six-lane highways.

Adding autonomous vehicles to our current transportation system would be like pouring grease down drains made to move water. When you introduce substances that the system isn’t made for, it clogs up.

How do we prepare our cities for automated transportation? We focus on flow. We build small towns within big cities and expand from there.

They kill pedestrians, pollute the air, and demand tons of space for movement and parking. Thanks to apps like Waze, traffic-averse drivers now rip through quiet streets where kids once played pick-up soccer without fear of getting squashed.

Walking, electric scooters, and bicycles are far superior on tight streets over short distances [disclosure: I’m an investor in Wheels, an electric minibike startup]. Before we add smart technology, we should eliminate street parking and install pathways designed for walkers, bicycles, and scooters.

Second, let’s unclog our highways. The next scale of transportation is between neighborhoods. Think about Los Angeles. At 4:30 pm, Google Maps says that driving the 26 miles from Santa Monica to Burbank takes somewhere between 1 hour 15 minutes and 2 hours 50 minutes depending on your route and on how bad traffic is. Why would adding a fleet of self-driving cars make traffic better?

Instead, let’s reserve one lane of the Santa Monica freeway for people movers. They look like a cross between a miniaturized bus and glorified golf cart that fits two people and luggage. A people-mover convoy going both directions in one dedicated freeway lane can carry more traffic at rush hour than the other nine lanes of cars on the Santa Monica Freeway. Over time, they can leave the dedicated lane and take you to your destination. Mass transit indeed.

What about trains, subways, and light rails? They’re expensive to build, they have a set schedule, and they go only to specific stops. Forget them. Build the future, not the past.

Third, let’s add airways and underground tunnels on high-demand routes. Beyond about 30 miles, flying cars (or drones), Boring Company tunnels, and hyperloops make sense. They can transport people from city-to-city or from a crowded airport to a city center.

I favor these options over highways and trains for the same reason Jane Jacobs protested the Lower Manhattan Freeway, which would have bisected SoHo and Little Italy in New York. Mass, above-ground transportation infrastructure can kill what makes a neighborhood beautiful.

San Francisco’s Embarcadero Freeway, built in 1959, did just that. It was a double-decker eyesore that blocked everyone’s view of the bay and made the waterfront feel distant. The 1989 Loma Prieta earthquake destroyed the freeway. Fixing the Embarcadero would have been as expensive as rebuilding it, so the city demolished it without remorse. San Francisco is better off.

Jane Jacobs concluded her Fortune piece with a prescient warning to smart city planners: “Designing a dream city is easy; rebuilding a living one takes imagination.” Our challenge is to imagine physical spaces that can support 21st century dreams. Let’s dream for people, not for our pet technologies.